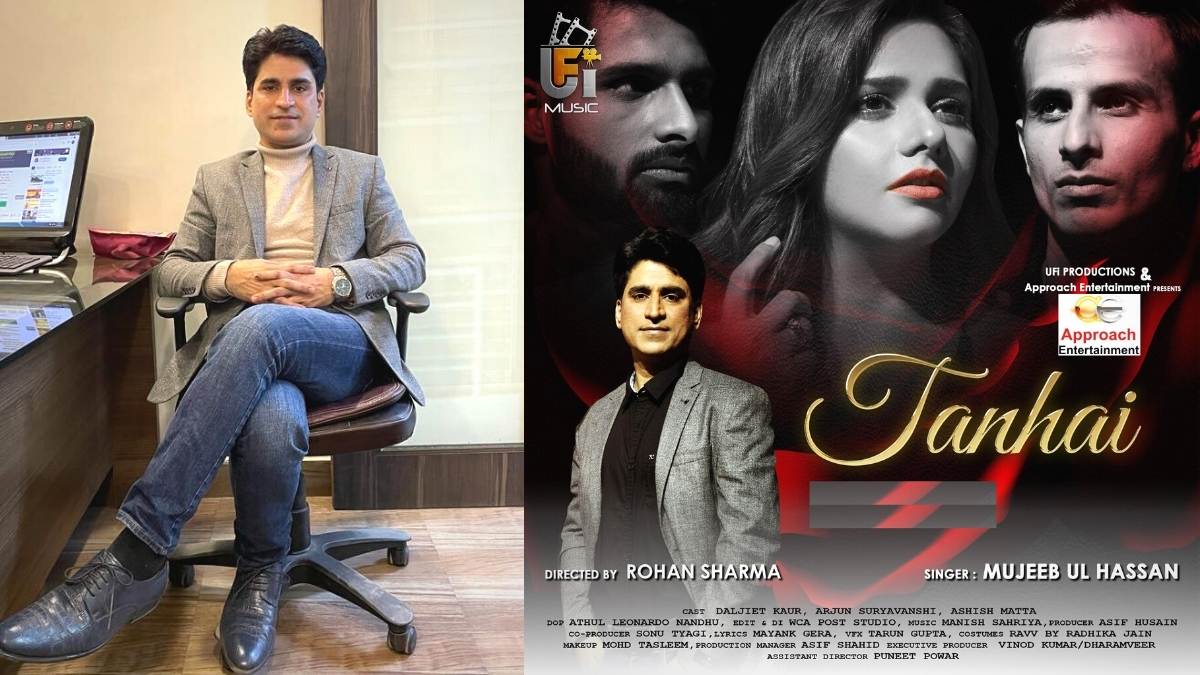 With the release of Tanhai music video on UFI Music digital platforms, successful singer- producer Mujeeb Ul Hassan has astonished the listeners with his soulful music & voice . Mujeeb Ul Hassan has also co-produced bollywood movies Dekh bhai Dekh (2009), Side A & Side B (2018), Rabbi (2017), Mantostaan (2017), San 84 Justice (2019), and produced Camp Decent which has been completed now. Camp Decent will be released soon.

On 16 December 2022, the trailer of Tanhai music video was launched on social media platforms like Facebook, Twitter, YouTube, and netizens commented on how the meaningful lyrics and Mujeeb Ul Hassan’s mesmerizing voice enthralled them. The trailer of the song was well appreciated by the music lovers & celebrities aike. Senior actors in Bollywood like Brijendra Kala appealed to all music lovers to watch & listen to the song Tanhai praising the singer Mujeeb Ul Hassan , lyrics, music and its music video. Directed by Rohan Sharma, the heart-warming song has been written by Mayank Gera and the music has been given by Manish Sahriya. The music video’s DOP is Athul Leonardo Nandhu and VFX by Tarun Gupta.

Talking about the song Tanhai ” Tanhai song is very close to my heart as I was always very confident about its soulful lyrics & music. We have recently launched this music label UFI Music & we are also working on our upcoming film which is in the post production now and will be released soon. I thank the audience for appreciating the trailer of the song and now they can listen to the full song ” said the singer Mujeeb Ul Hassan.

Well-known companies UFi Productions and Approach Entertainment have jointly released the Tanhai song on the occasion of Christmas & New Year. The Tanhai Music Video & Song is available on all digital platforms now.

“Tanhai is for those couples who feel lonely when they part ways unintentionally. Listening to this song will reduce the emotional pain of couples dealing with break-ups and separation. With Mujeeb’s voice and Dalljiet Kaur, Arjun Suryavanshi, and Ashish Matta’s performances in Tanhai music video, you will feel the deep sadness that can also deepen your love for your partner. With the soothing musical score and intense emotional lyrics, you will feel like slow-dancing with your partner,” said Sonu Tyagi, Director of Approach Entertainment.

Dalljiet, Arjun, and Ashish all look stunning and intense in 2022’s most promising music video Tanhai. Their graceful looks and mature performances have made the music video look more natural and authentic. It seems like a visual treat for viewers who want to dance under the Christmas tree and feel the warmth of their love towards their partners. Overall, the melodious music video is a game-changer at a time when rap and hip-hop songs get picked up in trends immediately. However, Tanhai doesn’t seem to die or fade out for a long, long time because it is about healing the pain in romantic relationships. It will be liked by all kinds of audiences, youth & old alike.

On 16 December 2022, the trailer song of Tanhai music video on social media platforms like Facebook, Twitter, and YouTube was released, and netizens commented on how the meaningful lyrics and Mujeeb Ul Hassan’s mesmerizing voice enthralled them. Directed by Rohan Sharma, the heart-warming song has been written by Mayank Gera and the music has been given by Manish Sahriya. The music video’s DOP is Athul Leonardo Nandhu and VFX by Tarun Gupta.

If you have any objection, queries or clarification regarding this press release content, please notify us. We will respond and rectify the situation within 24 to 48 hours.